skip to main | skip to sidebar

So much has changed since my last blog entry in January. Last time I wrote that we had reached 1000 scans in the database. This time around, im excited to say we reached 2000! This is a great milestone for the site. The purpose of the site is to at somepoint account for almost every VHS release between the 1980's through the early 1990's, and so far we've only accounted for slightly over 2000 (barely scratching the surface).

A big thanks goes out to the guys at the video store where I've been going every weekend to scan their inventory. They have I would guess around 10,000 VHS tapes, and so far, we only scanned around 700 of them. We have quite some work ahead of us, and it will probably be another year or so before we complete this journey.

At some point when he has the time, my web programmer is going to make some layout changes which will make the site look much more aesthetic and easily navigable. There will also be a few other cool features which I will keep as a surprise. Nothing major, but certainly a nice touch to the site.
Since January, i had written a few articles, including one on the alleged misogyny of horror cover art, and another showing the top 16 most valuable US horror VHS.

Oh, and I can't forget! VHSCollector.com was featured on a the DVD release of Millard's Death Nurse. I was fortunate enough to make an exclusive review of the film that was put onto the DVD. And this is a legit factory pressed DVD, not some DVD-R crap! Be sure to pick yourself up a copy on Amazon!

Big thanks to everyone who have contributed their cover scans to the site! Keep it going and encourage others to do the same. The more information we have on the titles, the more complete we can make the catalogs.

Also, we are also looking for contributors to the site! If you're a decent writer, you could possibly write articles, reviews, or other relevant material for the site. Thanks everyone! :)
Posted by Paul at 4:26 AM No comments:

Video review for "Spine" now up! 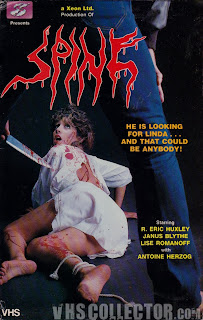 Check out the review for this super rare obscurity!

Watch the review on the site here!

Review of "Spine" in the following days!

I haven't really kept up to date with this blog so much mostly due to being preoccupied by the site and Facebook page. But seeing that this blog for some reason does well on the Google search results, I shall maintain it to keep all you stragglers and wanderers up to date :) Several weeks ago, I had finally had the honor to review the shlockfest, "Gore-met Zombie Chef From Hell." It ended up being my longest review yet at twenty-two minutes! It was a review long overdue. I had finally been reunited with the the glorious big box. I maintain the strict rule of not reviewing a film unless I have the original VHS tape in my grasp.

Watch "Gore-met Zombie Chef From Hell" Review Here!
Now that I was lucky enough the score the infamous and extremely rare video, "Spine," I will be reviewing it! Spine had always been on the top of my list right next to Majestic Home Video's "Mama's Home." I had gotten that one several years ago, and now I have Spine on my shelf. 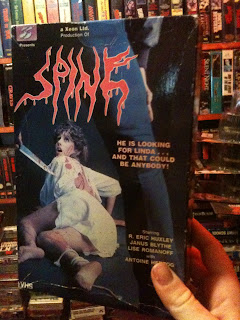 So over the years, I thought it was time for a change, a big one. I finally took the huge step to change what once was SlasherIndex.com. It has now evolved into VHSCollector.com. Unlike the original site that merely had artwork and some distributor info here and there, VHSCollector.com is jam packed with new awesome features I had only dreamed of when I was putting SlasherIndex.com together years ago. The VHS collecting community will now have an ultimate source for anything VHS, from distirbutors, to reviews, interviews, articles, etc. Create an account now and upload your scans to the database! Thanks for the support over the years guys.

Click here for the new site!!
Happy Hunting!
Posted by Paul at 3:11 AM No comments:

Thanks for taking the time to speak to the few of us that really cherish the horror artwork of the forgotten VHS format. After many years of seeing the artwork on the shelves of video stores across the country and now in our own personal VHS collections, it’s a great honor to speak to one of the artists who actually contributed to the horrific horror VHS artwork of the 1980's. 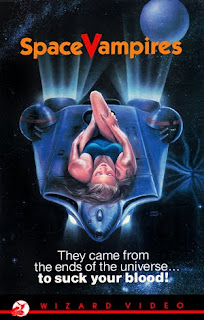 I first noticed your name on the artwork of Wizard Video's Space Vampires (a.k.a. Astro Zombies), how did you get hooked up with Wizard Video and what was it like working for them?

Some of the jobs came through outside design firms. I can’t really remember the names of them, except The Don Mennell group. I did work for Virgin video, VCL, Video Gems, Empire, Universal, API, Imperial Entertainment, Overseas film group, CineTelFilms, Vidmark, Lightning Video, and Magnum Ent, Fox, and others.

How were the jobs assigned? Did they prefer you to conjure up your own artwork based on the title, or did they require you to watch the movie first?

I don’t ever remember watching any of the videos. They’d give me screengrabs (from a Sony Video Printer), and a vague idea of what they wanted. I’d then work up 1-3 sketches and we’d go to final color. I remember it being difficult to get back the original art sometimes, but I was a bulldog and got back most. 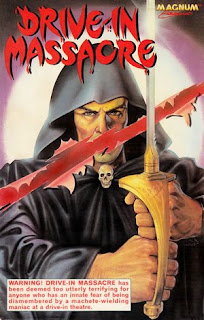 I remember meeting Ralph Bakshi and Frazetta once at a meeting. I met my wife at Virgin Video during a meeting. I put her in a few covers, only one in the Horror genre. It’s the cover for Scream and Die! (This artwork wasn’t used in the VHS release, but in promotional material)

Some of my best pieces I never got the art back from. My all time favorite was Chopping Mall. Great title. I put the face of a good friend in the bag of Body Parts. Another fav was Re-Animator. Had some good reference on that one, never have seen the movie. I remember taking a job that no one else would touch because it showed a baby being sacrificed (well, held up in the air about to be) by Oliver Reed and his bunch of Satanic buddies. Can’t remember the name of that one. I remember working on Highlander. Three artists met late one Wednesday afternoon. We had to each do 2 highly detailed black and white comps overnight and have them back by 8AM. I had my Dad pose for the first time and he was great. I’d never worked an all-nighter before that. We all cracked up at how each other looked the following morning. But hell, I made $2,000 in one night. Better than a hooker.

Another that was fun because it sounded so nasty at the time was ‘Succubus Sex Slaves to the Devil.’ A truly horrible piece of art, but a cool title was 976 EVIL. It was a good time to be an artist who could paint people. Now it’s mostly photo montages done by non artists. I landed Disney as a client way back when video was first starting out, and that turned out to be the direction my art went. I remember one fine day when I did a meeting at Disney, then hopped in my car and went to Hustler. I met Larry Flynt that day. He was in his gold wheelchair, coming towards me, as I stepped from the elevator. He was surrounded by hot babes who were all over him.

Seeing you did the artwork for many horror titles, did you ever have an interest in horror cinema? Were there ever instances where the screenshots or descriptions of the films you were doing artwork for caught your interest enough to make you want to see the film?

I've never had an interest in such films, I've studied metaphysics all my life, so slasher films are the polar opposite. I figure I'm here for a certain amount of years, why not study things that you'll take with you.

What was it like to see your artwork on the shelves of video stores across the country?

It's exciting even today when I see my art somewhere, be it on a bus, billboard, magazine, DVD cover, book cover. My daughter likes to brag about them, especially when she's in the art.

How much were you usually paid per VHS title?

Thanks Corey for taking the time to answer a few questions. Do you have any advice for people looking to working in art for big companies such as Disney?

As far as breaking into big companies, it’s all karma, be at the right place, or know the right people.
Posted by Paul at 10:28 AM 4 comments: